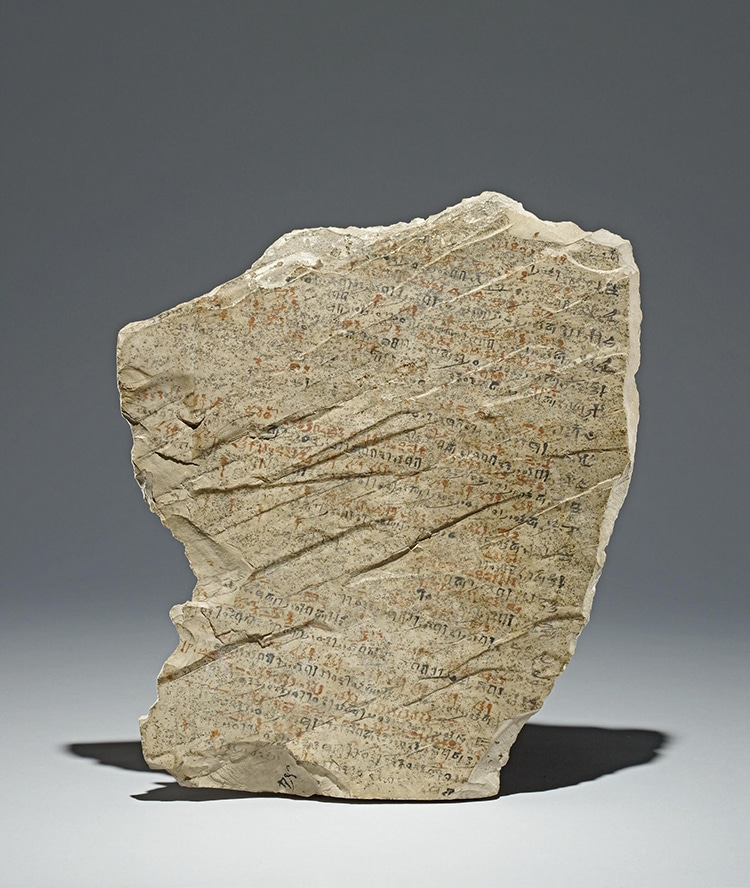 Having a sick day is not a new concept, it appears that back in the days of Ramesses II the folk of ancient Egypt weren’t just calling in a sick day but their managers were documenting it as well. Reading it is pretty special.

In line with existing government guidelines employees can take sick leave of absence from work duties if they are ill. And it appears that our ancient Egyptian relatives shared this same civilised work mantra back in their day.

A tablet held by The British Museum dating back to 1250 BCE offers a fascinating snapshot into the work-life balance of the period. The Ostracon is a limestone tablet with twenty-four lines of New Egyptian hieratic on the front and twenty-one lines on the back. A list of forty names are arranged in columns on the right edge of each side, followed to the left by dates written in black in a horizontal line. Above most dates is a word or phrase in red, indicating the reason why this individual was absent from work on that date.

Seba was “bitten by a scorpion”.

It’s fascinating to see the reasons why people needed to take time off work, here are just a selection of them…

Buqentuf was “wrapping the corpse of his dead mother“

Amenmose “fetching stones for the scribe“

Huynefer was frequently “suffering with his eye”

Aapehti was frequently “ill” followed up with “making offerings to god“

Seba was “A scorpion bit him“.

“Brewing Beer” was also a common reason for absence. Beer played an important part of daily life in Egypt at the time and was even associated with gods such as Hathor.

Although the list was compiled in Year 40, the information is likely to relate to the preceding year. The register was probably composed from a day-today rota kept as notes on smaller ostraca; only about 70 out of the 280 days covered by the register seem to have been full working days. Qenherkhepshef is mentioned by name in l. 11 of the verso in a red entry, and is alluded to as ‘the scribe’ in several others.

On month 3 of Akhet, days 21-4, it seems that Pennub was off work because he was looking after the ill Aapehti. The most frequently recorded reason for absence is illness (over a hundred times), including ‘eye trouble’, and ‘the scorpion stung him’; the next most frequent is being away with one’s superior doing private work for him, a practice that was not forbidden if done in moderation.