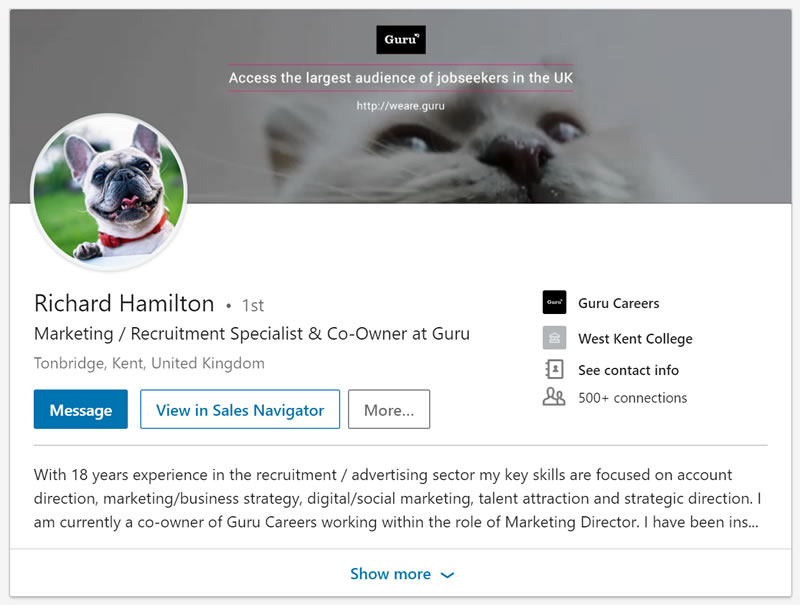 Unconscious bias can be a real problem in recruitment, it influences decision making and by definition gives weighted preferences to certain candidates without anyone being made aware it’s happening.

One method of resolving this is ‘Profile of Dogs‘ a Google Chrome extension which replaces LinkedIn profile images with dogs.

Produced by Product Designer and TED employee, Aaron Weyenberg, this free plugin has been designed to “Reduce your implicit bias while browsing LinkedIn” which means Employers, Hiring Managers and Recruiters reduce how people’s appearance subconsciously influences the evaluation process.

This isn’t a new idea, in another unconscious bias example Creative network – The Dots introduced their Bias Blocker last year which allows recruiters to block profile photos so they can appraise candidates without prejudice.

The idea came about when a Hiring Manager at AKQA was spotted using Post-It notes to cover the images of candidates. The Dots developed this as a concept that now allows users to omit personal data such as name, photo, education and other information that could bias their hiring decisions.

Candidates Should Be Considered Solely On Talent

One of the earliest adopters of ‘Blind Recruitment’ was the Boston Symphony Orchestra who in 1952 became concerned by the predominantly male composition. Musicians were asked to audition behind a screen, to ensure they were being judged purely on their performance rather than their gender.

Today, the Boston Symphony Orchestra has been joined by a number of major orchestras in employing blind recruitment methods in the name of diversity.

‘Blind recruitment’ stretches far beyond the music industry and has become common practice amongst leading organisations. In a recent survey by Adecco Research, they reported as many as 35% of UK businesses adopt some form of blind recruitment process, with the BBC and Deloitte amongst big adopters.

How To Overcome Unconscious Bias

Although ‘Profile of Dogs’ and ‘Bias Blocker’ are good concepts unconscious bias goes far deeper than just blanking out a few bits of information, it can have an effect all the way down the Recruitment and HR chain interfering with promotions, performance management and more.

To limit your exposure to unconscious bias keep the following in mind: