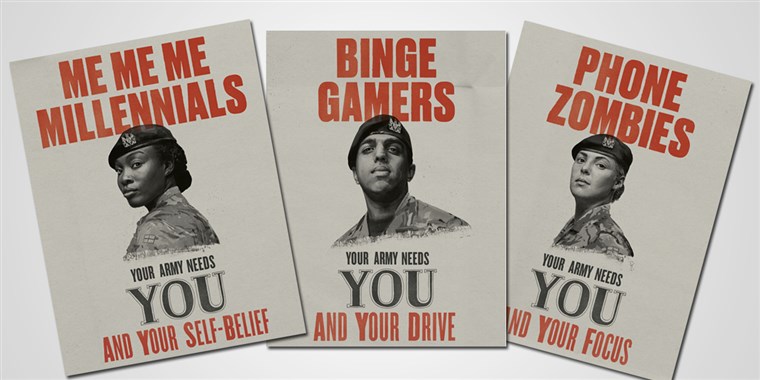 The UK army has been heavily criticised for a new recruitment advertising campaign targeted at millennials. The posters which rip off the iconic WWI army ads, now feature “snowflakes”, “selfie addicts”, and “binge gamers”.

Aiming to show how negative stereotypes about young people can actually be assets, the UK Army collaborated with Karmarama to produce the campaign. Continuing along the “This is Belonging” theme, each spot tells the story of an individual whose perceived weaknesses become strengths in the Army, such as a binge gamer whose stamina serves him well in the field or a class clown whose spirit cheers up his fellow soldiers.  However it’s also been lampooned by many as a pathetic attempt by middle-aged marketers to create something that resonates with Generation Z…

Gavin Williamson, the defence secretary, defended the campaign, describing it as “a powerful call to action that appeals to those seeking to make a difference as part of an innovative and inclusive team”.

A powerful call to action or an insult to young people?