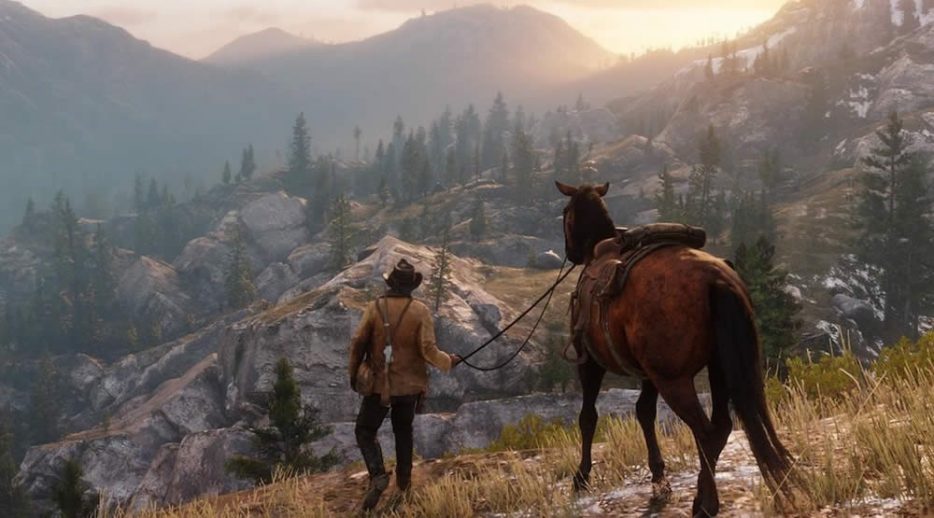 What do you do when you’re working on one the biggest video games of all time but you know your hard work will likely be glossed-over and under-compensated?  Include a reference to it in the game your working on of course…

​A few weeks prior to last week’s release of Rockstar Games’ highly-anticipated “Red Dead Redemption 2” the studio’s carefully-planned PR push backfired a bit when lead writer Dan Houser casually brought up pushing 100-hour work weeks to finish the game. Kotaku reporter Jason Schreier followed this concerning comment up with a detailed report featuring testimony from many anonymous current and former Rockstar employees speaking (many negatively, some positively) about the culture of questionably-voluntary overtime at the studio — a practice known in the games industry as “crunch.”

Thousands of people worked on Rockstar’s latest, and it shows in the fine details. Plenty of things that would be handled with strategic cuts and menus in other games are rendered in obsessive detail in “Red Dead Redemption 2,” including the Sears Roebuck-knockoff catalogues players peruse to buy guns, tonics and other goods. This Reddit user u/ObZenDF noticed something peculiar in the catalog’s copy for the game’s standard six-shooter: lines about the workers who make it.

Ranchers, lawmen, cattlemen and cattle rustlers alike swear an oath to this majestic revolver. It has saved many a skin and shed a few tears throughout the years. We believe you will agree there is no more iconic well known revolver on the market today. A sidearm for many years of the US Army, it is manufactured at a factory we own and control in Worcester, Mass. It is made by skilled laborers who work tireless hours each week and on the weekends for little pay in order to bring you the finest revolver in the field today. It carries a distinctiveness in beauty and design that will compel you to display it at weddings, funerals, and during late nights when tempers may run amuck.

As noted by Tom Phillips at Eurogamer, the line about Worcester, Massachusetts could be a possible hint at Rockstar’s New England studio in Andover, about an hour drive away. The gun itself seems to be modeled off of the Colt Single Action Army revolver, or the “Peacemaker” — Colt was and still is based in Hartford, Connecticut, for what it’s worth.

You might easily write this off as a bit of Rockstar’s satirical edge coming through in the game’s flavor text; after all, as many reviewers noted, the game’s story is very conscious of the kinds of exploitation common in 19th century America, albeit at a surface level. It’s possible that the target of the joke here is 19th century advertisers, carelessly talking up poor labour conditions to sell meticulously-crafted wares. Then again, when the higher-ups at Rockstar are doing a similar thing — even saying it’s like games are “made by elves,” not people — it likely wouldn’t be too hard to sneak a jab at the company culture in past bosses who’re oblivious to it. So long as the copy’s appropriately old time-y, into the game it goes! Contributed by Mat Olsen