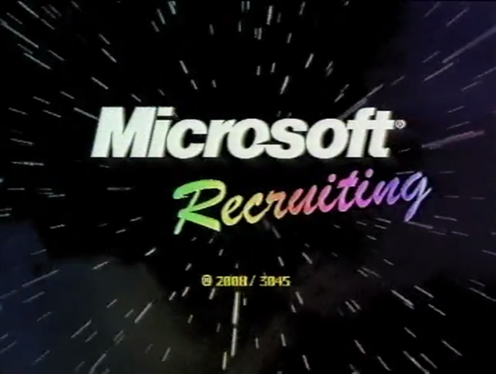 Found in the archives, these two recruitment videos from Microsoft’s talent attraction vaults are absolute gold. Possibly the most bizarre and least effective HR tools we’ve ever seen, Microsoft had these videos commissioned to stop the exodus of brilliant talent flocking in droves to seemingly more cooler companies.

Featuring new age imagery like crystals and geodesic domes the first video (above) takes you to the “distant future”. Director Brad Abrahams explains… “We were asked to help recruit up-and-coming ace computer programmers before they get snatched up by Google and Facebook. We thought the only way for them to appear fresh would be to do something they never do, poke fun at themselves, specifically in the context of how they are viewed in the computing community. Somehow Microsoft let the concept through. This is the result.”

The second video (below) is much stranger, featuring two computer programmers lured into a virtual world of their own creation by a gender-neutral artificial intelligence. Maybe the Microsoft Recruitment / Marketing team were in on the Windows 8 innovation meetings?